Focus on the textile world: from desert to wool

Potable water is becoming an increasingly rare commodity: the world population is growing, the demand for water is increasing, and at the same time climate change and other human influences are ensuring that the planet's already limited freshwater reserves are steadily dwindling. To open up new possibilities for harvesting potable water, new ideas are required – and nature's bag of tricks contains them! An exciting example inspired by nature is the Namib Desert beetle, whose method of obtaining supplies of precious water is being imitated by knitted geotextiles – ever more efficiently and on an increasingly large scale.

Water as a basis of life – a scarce resource

At first glance, the earth has water in abundance – after all, oceans and seas cover about 70% of its surface. But compared to these huge amounts of non-potable saltwater, the proportion of usable fresh water is very low, at only 3.5%. Most of the fresh water is tied up in glaciers, ice or groundwater, and only about 1.73% of the planet's total freshwater resources are accessible to humans. That corresponds to approximately 24.2 million cubic kilometers of water. The amount is sufficient, in theory, to supply the world's entire population.

However, large differences in seasonal and annual rainfall lead to many regions regularly suffering from water scarcity, and turning into steppes as a result of climate change. In the already vulnerable developing countries, the lack of water is frequently acute. The primary reasons for this are: a rapidly growing population, a high per-capita rate of consumption, and increasing pollution of the water available. 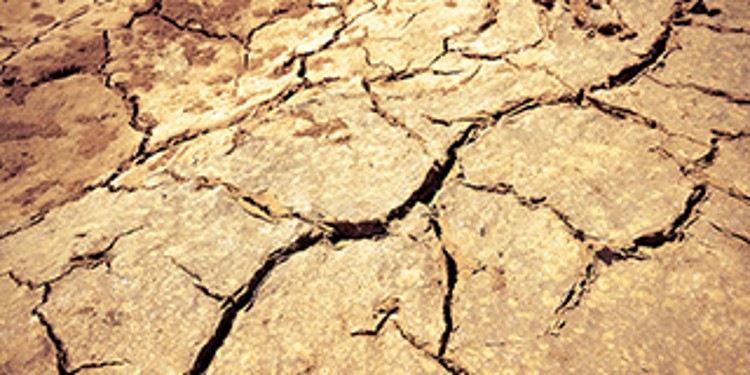 What will our world look like in the future? It's a question that concerns us now more than ever. In view of prevailing social problems such as global warming, desertification in once-fertile habitats, acute water scarcity and the ongoing energy crisis, politicians, research institutes, companies and many other groups have decided to tackle the issue of sustainability.

This development is also receiving urgent attention from the textile industry and, in particular, from the progressive area of geotextiles. Based on current assumptions, geotextiles are the fastest-growing sector in the field of technical textiles. At least 70% of geotextiles come under the category of nonwoven fabrics, while about 25% are woven materials. Only 5% of all geotextiles are crocheted or knitted. These knitted goods are being used increasingly in bionic projects.

Dried-up valley in the Namib Desert

The beetle sets an example

Currently, about one billion human beings have no access to clean drinking water, and in some developing countries, people have to make do with only five liters of water a day. By way of comparison, the average daily water consumption in Europe is about 200 liters.

A team of researchers from the Institute for Textile and Fiber Research Denkendorf, the Institute of Geosciences at the University of Tübingen, and industrial partners in the textile industry have all been working on a solution to this problem for quite some time now. Their fog collectors for harvesting potable water were inspired by nature – specifically, the method used by the Namib Desert beetle of Namibia. 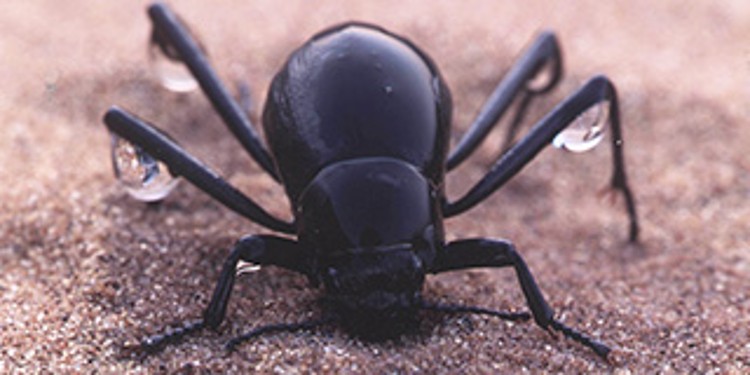 This species of beetle lives in the area covered by fog banks that move inland to the desert each morning from the Atlantic. Namib Desert beetles meet their water needs by taking up position on dune summits and ridges and stretching up their abdomens to make the water in the fog condense on their bodies. This capture of tiny aerosol droplets from the fog is facilitated by a hilly microstructure on the insects' carapaces. Once they reach a certain size, the resulting dew drops flow down the carapace toward the beetle's mouth.

In place of the microstructure of the beetle carapace, the researchers have developed a fiber-based material and a surface coating with which the finely distributed droplets of liquid in the air are collected, drained away in a targeted manner, and then processed into potable water. 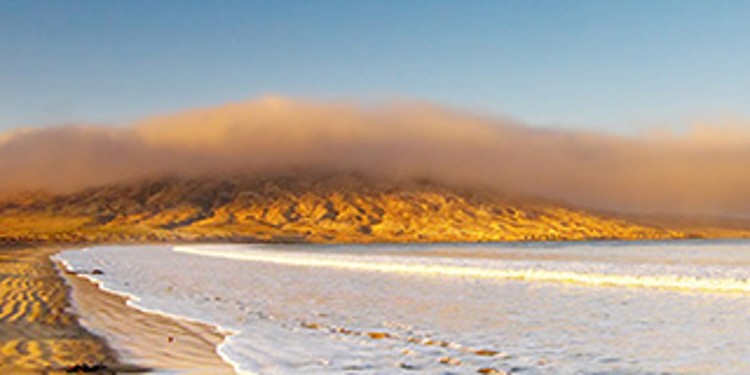 Fog banks moving from the Atlantic toward the desert: the Namibian coast

The first fog collector nets made of plastic, so-called "Atrapanieblas", were used in 1987 in Chile. Compared to their predecessors, the patented new developments from southern Germany have an impressive three-dimensional textile structure. Specifically, these are knitted spacer fabrics up to two inches thick, perfectly adapted to the extreme conditions of the desert. The fabric is three times more powerful than comparable solutions, and its tensile strength could withstand even strong hurricanes.

Initial field tests in the extremely arid Namib Desert, and in the mountains of Eritrea, have shown that water collection from fog, per square meter of fabric per day, can vary depending on location from three to 55 liters. The fog collectors, which can be now industrially manufactured, are an effective and inexpensive way of successfully supplying whole villages in arid regions as well as their agriculture with the vital resource. 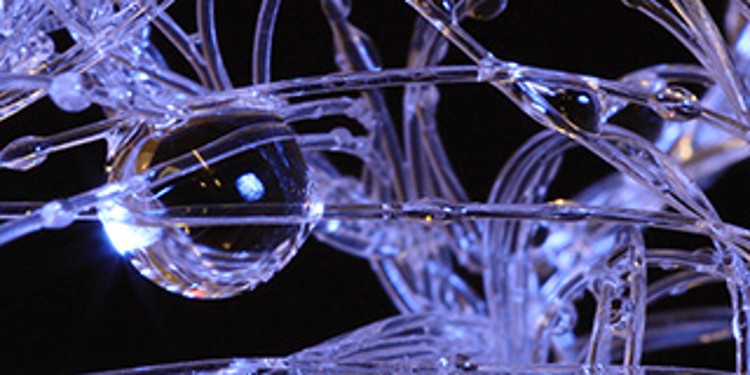 Are you interested in the development of knitted geotextiles, and do you need support with technical implementation? The Groz-Beckert experts will be happy to assist you in choosing the right products!