The customer at the center of the textile world

Today, needled nonwovens are used in a wide range of technical applications, as nonwoven in their own right, as geosynthetic clay sealing strips or combined with a geogrid as composite material.

Megatrends such as urbanization and the economic situation are driving factors for the continued growth of geononwovens.

Groz-Beckert uses the cooperation with customers and partners to create synergies and build up internal process knowledge, as well as to improve the advice and optimize products.

Various basic investigations are also carried out as part of this process: For example, the goal of a series of tests was to more precisely analyze the impact of the needle's working part geometry on a textile's physical properties depending on the fiber orientation and the needling parameters of nonwovens. Here, a particular focus was placed on the application of the geo-nonwovens.

Geotextiles must fulfil several requirements simultaneously. Separation, filtration and draining are among its task, whereby the mechanical stress usually tests the limits of its capacity. The geotextile robustness classes dictate what a geotextile can ultimately withstand.

The following tests are required for nonwovens:

The measurement values enable the geotextiles to be allocated to the robustness class.

Depending on the type of geotextile, we differentiate between five different robustness classes – from GRC 1 to GRC 5.

Nonwovens in geotextile robustness class 5 must have a fabric weight of at least 300 gsm and a stamping puncture force of at least 3.5 kN.

In order to take into account the production-related product deviations, the requirements always refer to the 5% minimum quantile.

The most suitable needle to meet the product requirements 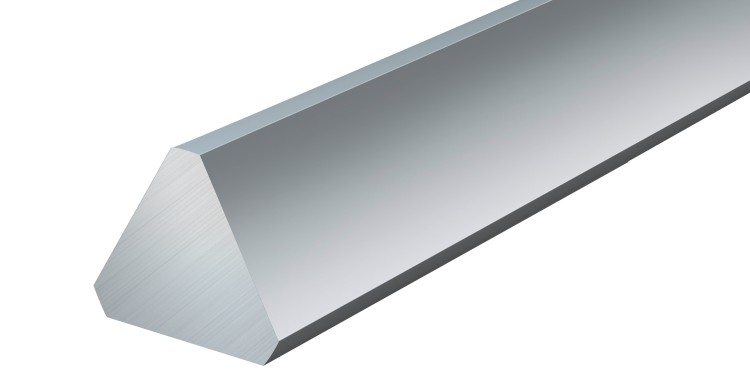 In sections of the geotextile spectrum, Groz-Beckert customers work with Tri STAR® and Cross STAR®-felting needles, as the surface quality plays a secondary role, but high tensile strengths are required in the product.

In order to correspond to at least robustness class 5, a nonwoven with a fabric weight of 320 gsm was produced. The web formation took place with 90 mm long polypropylene staple fibers with a fineness of 4.4 dtex. The draft in the web drafter VST19 was set at 40 %. 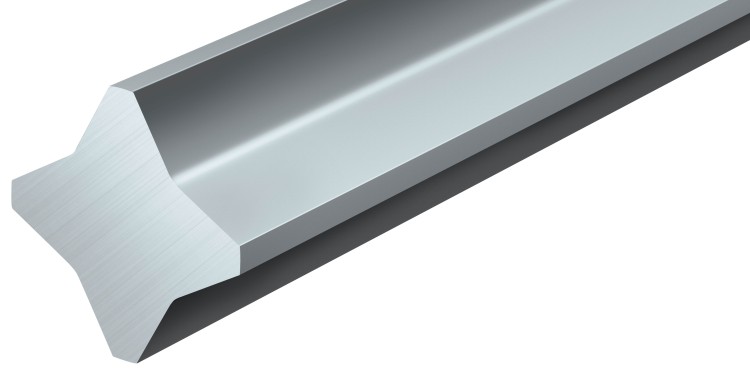 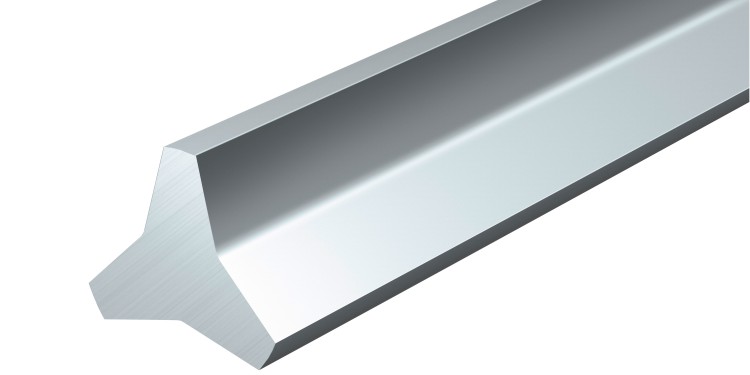 The pre-needling took place on a DI-LOOM OD-II 20 with GEBECON® needles. The stitch density was set to 75 S/cm² and the penetration depth was set to 10 mm.

The main needling on a DI-LOOM OUG-II SB 15 took place with all three working part cross-sections, always with a stitch density of 250 S/cm², in tandem operation. The penetration depth was set to 8 mm. 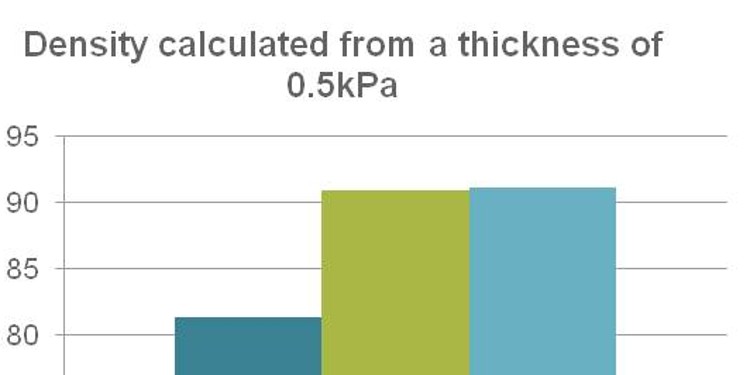 Density calculated from a thickness of 0.5 kPa

The testing on the density showed that the needling with Tri STAR® and Cross STAR® needles, compared with a standard triangular working part, achieves a nonwoven with a 10 % higher density with a similar fabric weight. This is due to the higher needling efficiency through improved fiber holding in the barb area (Tri STAR®), or the distribution of the barbs over four edges (Cross STAR®). Tri STAR® and Cross STAR® needles are mainly offered with a C barb spacing. The standard needle used has a R barb spacing and therefore offers a lower needling performance with the same needling parameters. 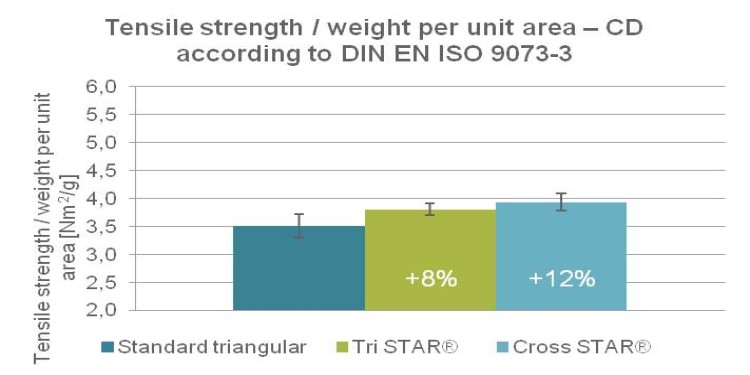 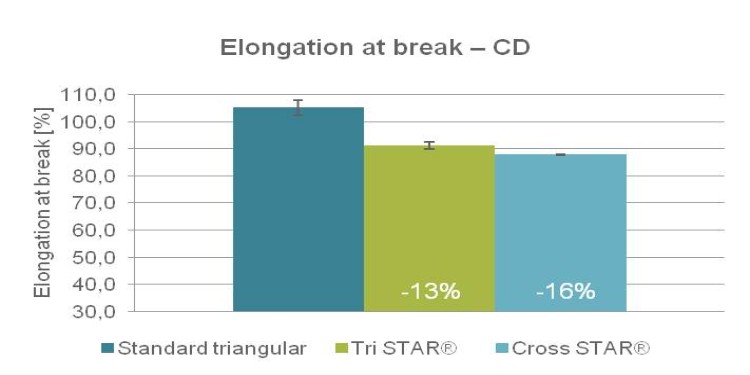 A test in accordance with DIN EN ISO 10319 could not be carried out due to the lack of wide clamping jaws. Instead, a test based on the standard 9073-3 was carried out.

During the measurement of the stamping puncture force in accordance with DIN EN ISO 12236, positive results were achieved across all three working part cross-sections. All needle types achieved the robustness class 5 requirements but the Cross STAR® felting needle achieved the best result. The adjacent table shows the results in graph form. The variations in the fabric weight were already excluded here so that the results can be compared directly. 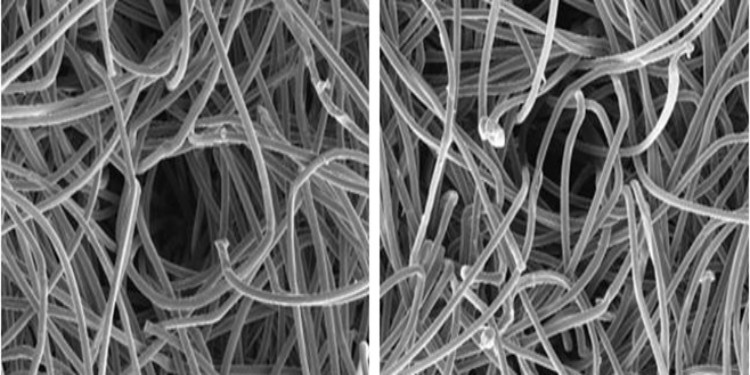 This series of tests shows the impact of the working part geometry of felting needles on the physical textile properties of geo-nonwovens. All nonwovens created during the test with a penetration depth of 8 mm achieved the robustness class 5 (> 300 gsm fabric weight and > 3.5 kN stamping puncture resistance).

Tests with a 50 % increase in the penetration depth (12 mm), show a significant drop in puncture force, meaning that only a lower robustness class could be achieved here. A direct comparison between the three different working part geometries generally shows that the Tri STAR® and Cross STAR® felting needles, compared with the standard triangular working part:

Based on these results, we can say that using Tri STAR® and Cross STAR® felting needles reduces the amount of raw material required with the same mechanical properties. Using the correct felting needles therefore has a significant impact on the material costs and, as such, directly on the manufacturing costs.

The Groz-Beckert Technology and Development Center (TEZ) provides the optimal prerequisites. With the knitting technology, weaving technology and nonwoven technology competence centers, it combines all modern surface formation methods under one roof.

The latter is also home to the new staple fiber needling line, which enables Groz-Beckert to expand its own process knowledge and continuously optimize its products as well as develop innovations for the nonwovens industry. The line is also available in various configurations to customers and partners for tests and joint projects in both needle and textile development. Focus is also on optimization of customer products and processes. The new line also provides customers with the option to produce small runs. Groz-Beckert's total supply portfolio helps prevent resource bottlenecks and production stops on its own lines.

Would you like to get more involved in the needling of fiber and nonwovens, or do you need advice on optimizing production of nonwovens or on how to expand your product range? Groz-Beckert experts in the subdivisions of Felting and TEZ will be glad to assist you and determine with you the best layout for your production.

Did you know this?

At a penetration depth of 6 mm and a stroke frequency of 1500 rpm with fully equipped needle board in our new staple fiber needle punch line, Groz-Beckert felting needles – in just 6 hours – cover a distance which complies with the circumference of the earth.